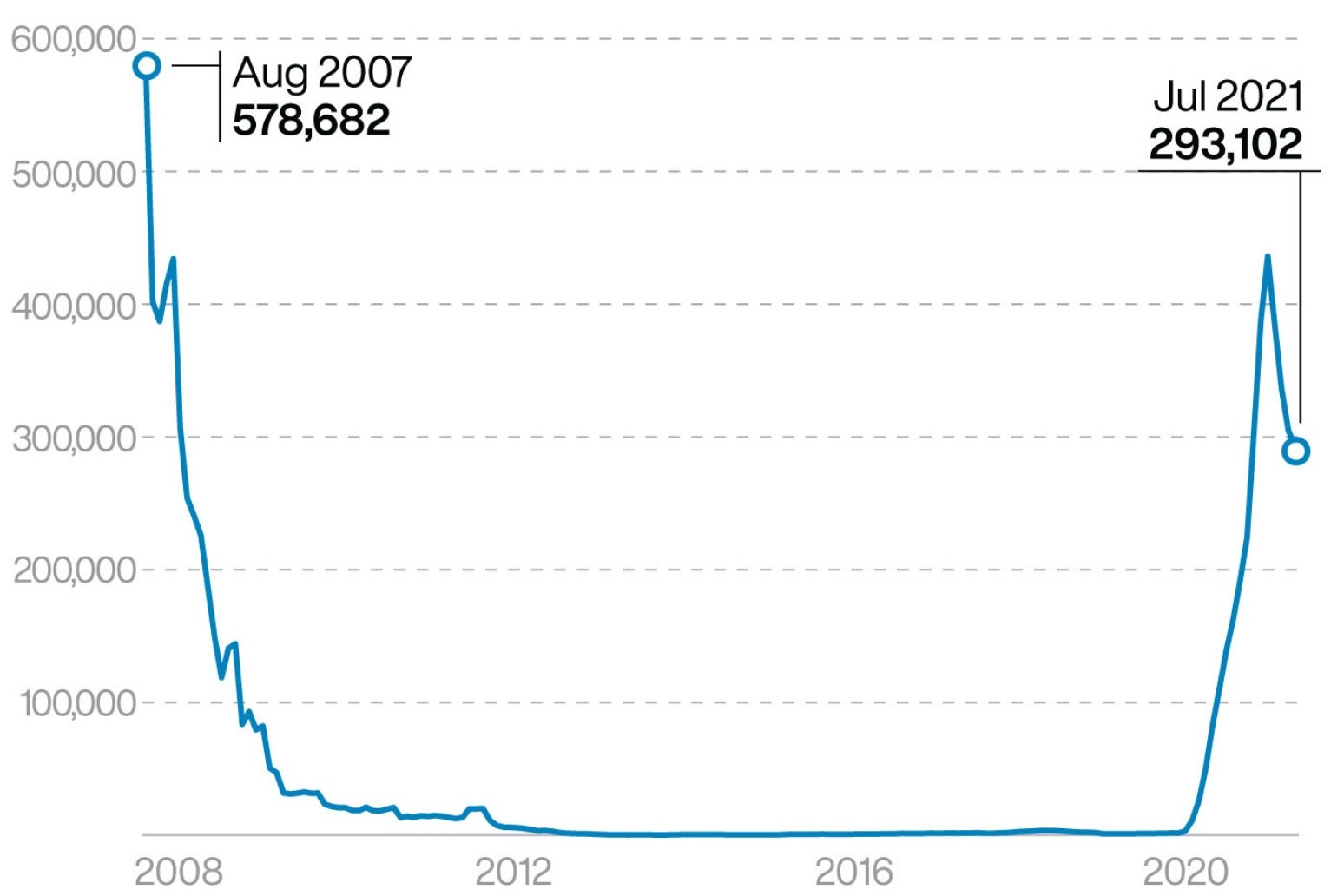 The number of people in England waiting for hospital treatment has reached a new record high.

A total of 5.6 million people were waiting to start treatment at the end of July, according to new figures from NHS England.

This is the highest number since records began in August 2007 and includes those waiting for hip and knee replacements and cataract surgery.

Health Secretary Sajid Javid has said he was warned the NHS waiting list could reach 13 million without immediate action as he pledged to tackle growing numbers.

Siva Anandaciva, chief analyst at The King’s Fund, said: “Despite the best efforts of NHS staff, waiting lists for routine NHS care have swollen to levels last seen 15 years ago.

“There are over 5.6 million people waiting for care already, often in pain and dealing with the uncertainty of when they will be treated.

“All NHS services are affected, with primary care, hospital care and mental health services seeing the demand for care rise as the immediate threat of Covid-19 recedes.

“Even before Covid-19, waiting lists for treatment had substantially worsened.

“The significant investment the Government has now promised is very welcome but will not lead to an increase the number of hospital beds or clinical staff overnight.

“The Prime Minister is right to warn the public that waiting lists will get worse before they get better.

“To deliver on his promise to cut the backlog, the Government now needs to back the investment it has provided with a plan to ensure the NHS gets the staff it needs.”

The data shows the total number of people admitted for routine treatment in hospitals in England in July 2021 was 259,642, up 82% from a year earlier (142,818), although this reflects lower-than-usual figures for July 2020, which were affected by the first wave of the Covid-19 pandemic.

NHS England said many more tests and treatments have been delivered this summer compared to last, while hospitals cared for thousands more patients with Covid.

It said there were 3.9 million diagnostic tests and 2.6 million patients started consultant-led treatment in June and July, compared with 2.7 million tests and 1.6 million treatments over the same time last year.

This came as the number of Covid patients in hospital grew from under 800 at the start of June to more than 5,000 at the end of July.

There are now more than 6,300 Covid patients in hospital, compared with fewer than 600 this time last year.

NHS England also pointed to data showing that almost half a million people were checked for cancer in June and July, among the highest numbers on record.

Professor Stephen Powis, national medical director for NHS England, said: “NHS staff have pulled out all the stops to deliver millions more tests, checks, treatments and operations than they did last summer despite caring for many more Covid patients.

“Caring for 450,000 patients with the virus has inevitably had a knock-on effect on less urgent care and left a backlog but staff are working around the clock to make the best possible use of Government investment to treat as many people as possible.

“We do not know how many of those who held back from accessing care during the pandemic still need treatment, but we expect more to come forward in the coming months, and I urge anyone who needs the NHS to come forward, including through NHS 111 online so that staff can help you with the best option for your care.”

The new data showed that more than 325,000 patients in England had been waiting more than six weeks for a key diagnostic test in July.

A total of 325,229 patients were waiting for one of 15 standard tests, including an MRI scan, non-obstetric ultrasound or gastroscopy.

Ambulance data also shows that those people needing ambulances for life-threatening conditions are often waiting longer than the target of seven minutes.

In August, the average response time was around eight and a half minutes.

The longest waits were for trauma and orthopaedic treatment such as hip and knee replacements, followed by general surgery such as gallbladder removals and hernia operations.

“Behind these eye-watering statistics are patients waiting in pain for hip and knee replacements and for heart, brain and other operations.

“Without surgery, many would be left unable to work or carry out everyday activities, their quality of life greatly diminished.

“We realise that reducing this enormous backlog will require commitment and a great deal of hard work from frontline NHS staff.

“However, as this week’s plan from the Government acknowledges, we also need extra capacity in the NHS, through the creation of new surgical hubs.

“The NHS will also need doctors, nurses and surgeons to staff these hubs, which requires long-term investment in our workforce.”

Tracey Loftis, head of policy and public affairs at Versus Arthritis, said: “The latest NHS figures again demonstrate the huge numbers whose lives are literally on hold as they are left struggling with the agony of severe arthritis, waiting for treatment.

“Whilst we welcome the additional funding for the NHS announced this week, it is important that joint replacement surgery is addressed as a priority area.”

Dr Susan Crossland, president of the Society for Acute Medicine, said: “Despite the distractions of funding announcements this week, this data shows the dire state of affairs we are in well before we embark on the challenges of winter.”