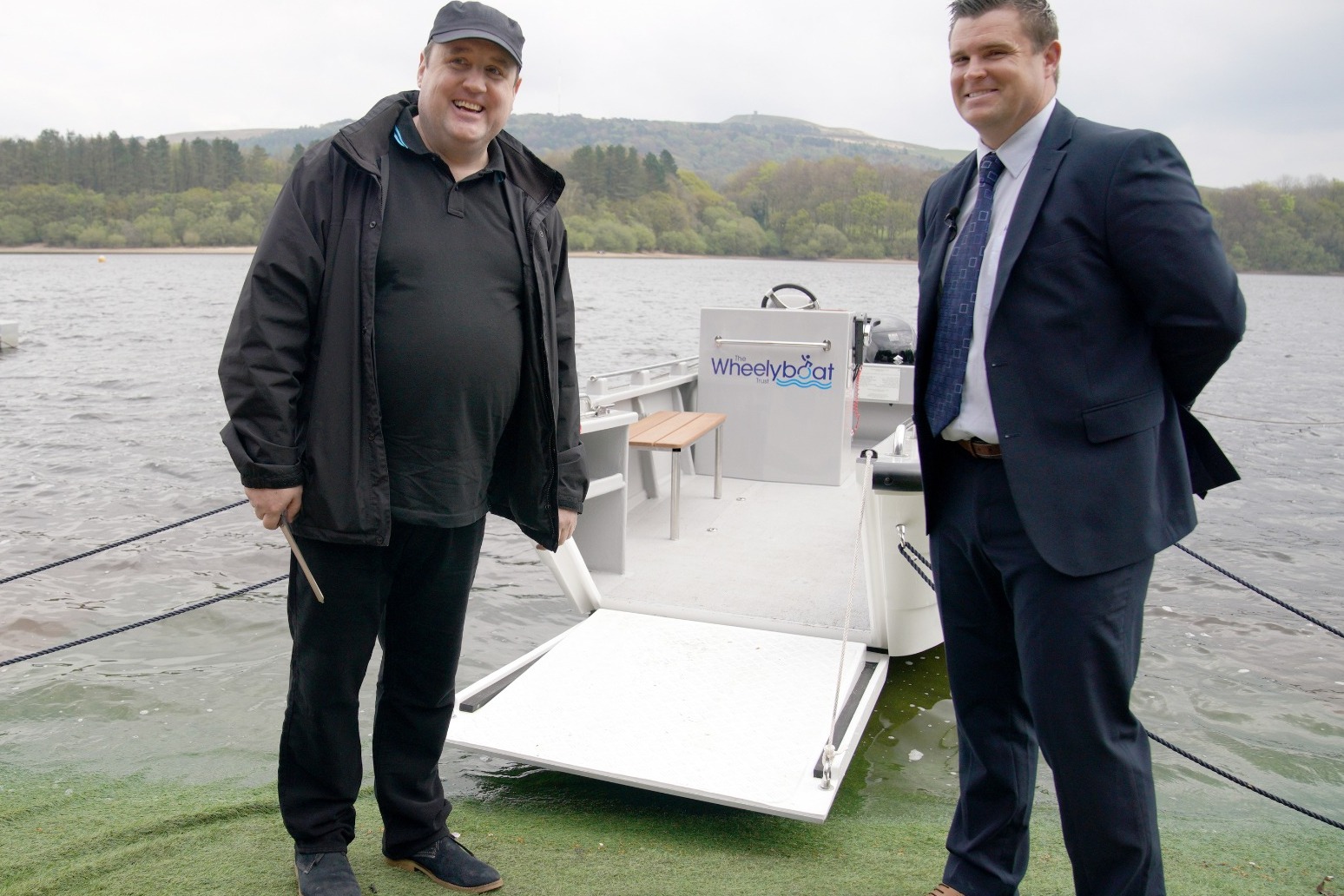 Comedian Peter Kay has launched a new wheelchair-accessible ‘wheelyboat’ near his home town of Bolton.

The comic, writer and actor said he and his children had enjoyed outdoor activities at The Anderton Centre, near Chorley, where the boat was launched on the Lower Rivington Reservoir.

It will give disabled adults and children the chance to enjoy water-based activities at the centre for the first time.

Kay, 48, stepped away from the public eye in 2017, citing “unforeseen family circumstances” but returned to the stage earlier this month to begin his first tour in 11 years, performing his Dance For Life show at Manchester Central Convention Complex on Good Friday.

Kay said more shows are planned for London this Friday and Liverpool in August, but any future TV appearance would remain a “surprise”.

After being introduced as guest of honour, to laughter Kay was given a T-shirt emblazoned on the back with the words ‘Honorary Instructor’.

Kay said: “It’s very lovely to be here today, I’m honoured to be asked to launch this fantastic wheelyboat, which I hope gives a lot of people a lot of pleasure and happiness out on the water.

“The Anderton Centre is a fantastic place and I love coming here, and the people are really nice and when it’s a nice day and there’s an heatwave you think you’re in the south of France.”

Kay then stepped down to the water’s edge to cut the ribbon on the boat, adding: “I’m just going to get on with cutting it with the scissors… I did think, I might be smashing a bottle against it, but apparently in the modern world that is not allowed for re-cycling.

“I’ve never launched anything in my life, apart from one of my children – no, only kidding.

“So I declare, this fantastic wonderful wheelyboat officially – don’t all run and jump on – open.”

Kay also shook hands and spoke briefly to local MP and Speaker of the House of Commons Sir Lindsay Hoyle.

The Coulam Wheelyboat V17 – a purpose-built fully wheelchair-accessible powerboat is the first for public use in Lancashire.

Andy Beadsley, director of The Wheelyboat Trust said: “Wheelyboats are a lifeline for anyone with a disability, as each boat removes the barriers and enables disabled people to participate alongside and on equal terms with their able-bodied counterparts.

“All too often people with disabilities are restricted in the activities they can take part in due to lack of accessible facilities and equipment, which is something we are striving to change.”

David Germain, chief executive at The Anderton Centre, added: “The North West has the second-highest proportion of disabled people in the UK, and in Greater Manchester alone there are over 521,000 people living with disabilities.

“We’ve long wanted to be able to accommodate those on our doorstep and further afield to take part and enjoy a range of waterborne activities, and for once participate on equal terms with their able-bodied counterparts.”