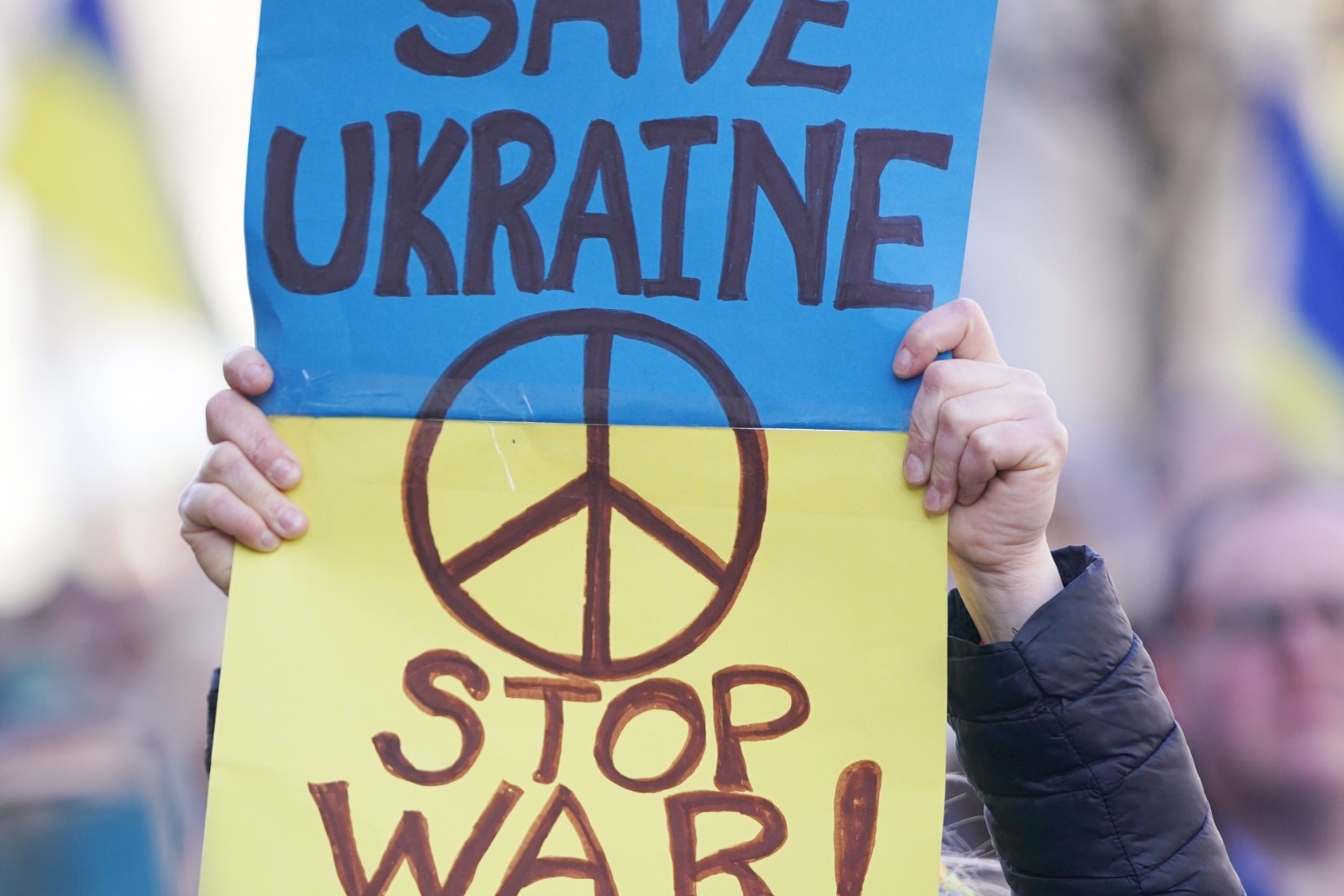 Russia announced yet another cease-fire and a handful of humanitarian corridors to allow civilians to flee Ukraine – despite previous measures falling apart and Moscow’s armed forces continuing to pummel some Ukrainian cities with rockets even after the announcement.

On Sunday, hundreds of thousands of civilians attempting to flee to safety were forced to shelter from what Ukrainian officials said was Russian shelling in cities in the centre, north and south.

Ahead of a third round of talks planned for Monday at 4pm local time (2pm GMT), the Russian Defence Ministry said a cease-fire would start in the morning, and safe passages would open for civilians from the capital of Kyiv, the southern port city of Mariupol, and the cities of Kharkiv and Sumy. Some of the evacuation routes, however, would funnel civilians toward Russia or its ally Belarus — unlikely destinations for many Ukrainians who would prefer to head toward countries on the western and southern borders.

It wasn’t immediately clear if fighting would stop beyond the areas mentioned or when the cease-fire would end. Hopes were dim that the latest round of talks would yield any breakthroughs.

Well into the second week of war, Russia’s plan to quickly overrun the country has been stymied by fierce resistance. Its troops have made significant advances in southern Ukraine and along the coast, but many of its efforts have become stalled, including an immense military convoy that has been almost motionless for days north of Kyiv.

The fighting has sent energy prices surging worldwide, stocks plummeting, and is threatening the food supply and livelihoods of people around the world who rely on farmland in the Black Sea region.

The death toll from the fighting, meanwhile, remains unclear. The UN said it has confirmed just a few hundred civilian deaths but also warned that the number is a vast undercount. Police for the Kharkiv region said on Monday that 209 people have died there alone — 133 of them civilians.

The Russian invasion has also pushed 1.5 million people to flee the country, creating what the head of the UN refugee agency called “the fastest-growing refugee crisis in Europe since” the Second World War.

But many others have become trapped in cities under fire. Food, water, medicine and almost all other supplies are in desperately short supply in the southern port city of Mariupol, which an estimated 200,000 people are trying to flee but where an earlier cease-fire collapsed. Russia and Ukraine have traded blame for the failure.

The Russian task force said the new pledge for humanitarian corridors was announced at the request of French President Emmanuel Macron, who spoke to Russian President Vladimir Putin on Sunday. Mr Macron’s office said he asked for a broader end to military operations in Ukraine and protections for civilians.

Ukrainian deputy prime minister Irina Vereshchuk called the proposed evacuation routes to Russia and Belarus “unacceptable”. Belarus is a key ally of Mr Putin and served as a launching ground for his invasion.

The Ukrainian government is proposing eight humanitarian corridors, including from Mariupol, that would allow civilians to travel to the western regions of Ukraine where there is no Russian shelling.

“Providing evacuation routes into the arms of the country that is currently destroying yours is a nonsense,” said UK Europe minister James Cleverly.

The Russian proposal was reminiscent of similar ones in Syria. In 2016, a joint Russian and Syrian proposal to set up humanitarian corridors out of besieged opposition-held eastern Aleppo was deeply criticised on humanitarian grounds. Human rights activists said the tactic, coupled by brutal sieges, effectively gave residents a choice between fleeing into the arms of their attackers or dying under bombardment.

Meanwhile, Russian forces continued their offensive, opening fire on the city of Mykolaiv, 300 miles south of the capital, according to Ukraine’s General Staff. Rescuers said they were putting out fires in residential areas caused by rocket attacks.

Shelling also continued in the suburbs of Kyiv, including Irpin, which has been cut off from electricity, water and heating for three days.

“Russia continues to carry out rocket, bomb and artillery strikes on the cities and settlements of Ukraine,” the General Staff said.

The General Staff also repeated earlier Ukrainian accusations that the Russians have targeted humanitarian corridors. The statement also accused Russian forces of taking women and children hostage and placing weapons in residential areas of cities — though it did not elaborate or provide evidence.

“Instead of humanitarian corridors, they can only make bloody ones,” Ukrainian President Volodymyr Zelensky said on Sunday. “Today a family was killed in Irpin. Man, woman and two children. Right on the road. As in a shooting gallery.”

Mr Putin earlier said Moscow’s attacks could be halted “only if Kyiv ceases hostilities”. As he has often done, Mr Putin blamed Ukraine for the war, telling Turkish President Recep Tayyip Erdogan on Sunday that Kyiv needed to stop all hostilities and fulfil “the well-known demands of Russia”.

Mr Putin launched his invasion with a string of false accusations against Kyiv, including that it is led by neo-Nazis intent on undermining Russia with the development of nuclear weapons.

“There can be no ‘green corridors’ because only the sick brain of the Russians decides when to start shooting and at whom,“ Ukrainian Interior Ministry adviser Anton Gerashchenko said on Telegram.

On what is known as Forgiveness Sunday in Orthodox Christianity, Mr Zelensky said Ukraine will never forgive the shelling of its homes, the killing of unarmed people and the destruction of its infrastructure.

“And God will not forgive, either today or tomorrow — never. And instead of a day of forgiveness, there will be a judgment day. Of this I am sure,” he said in a video address.

His adviser, Oleksiy Arestovich, described a “catastrophic” situation in the Kyiv suburbs of Bucha, Hostomel and Irpin, where efforts to evacuate residents on Sunday failed. About eight civilians were killed by Russian shelling in Irpin, according to mayor Oleksander Markyshin.

Video footage showed a shell slamming into a city street, not far from a bridge used by people fleeing the fighting.

British military officials compared Russia’s tactics to those Moscow used in Chechnya and Syria, where surrounded cities were pulverised by airstrikes and artillery.

“This is likely to represent an effort to break Ukrainian morale,” the UK Ministry of Defence said.

The handful of residents who managed to flee Mariupol before the humanitarian corridor closed said the city of 430,000 had been devastated.

“We saw everything: houses burning, all the people sitting in basements,” said Yelena Zamay, who fled to one of the self-proclaimed republics in eastern Ukraine held by pro-Russian separatists. “No communication, no water, no gas, no light, no water. There was nothing.”

Russia has made significant advances in southern Ukraine as it seeks to block access to the Sea of Azov. Capturing Mariupol could allow Moscow to establish a land corridor to Crimea, which Russia annexed from Ukraine in 2014 in a move that most other countries considered illegal.

But much of the Russian advance has become stalled, including an immense military convoy north of Kyiv.

A senior US defence official said on Sunday that the US assesses that about 95% of the Russian forces that had been arrayed around Ukraine are now inside the country. The official, who spoke on condition of anonymity to discuss military assessments, said Russian forces continue to advance in an attempt to isolate Kyiv, Kharkhiv and Chernihiv, but are being met with strong Ukrainian resistance.

The West has broadly backed Ukraine, offering aid and weapon shipments and slapping Russia with vast sanctions. But no Nato troops have been sent to Ukraine.

Mr Zelensky has heaped criticism on Western leaders for not responding with more force to Russia. He reiterated a request for foreign forces to impose a no-fly zone over Ukraine, which Nato so far has ruled out because of concerns such an action would lead to a far wider war.

Mr Zelensky also asked the US and Nato countries to send more warplanes to Ukraine and for more sanctions against Russia.

Russia has become increasingly isolated in the days since the invasion began, as sanctions forced dozens of multinational companies to end or scale back their work in the country and Moscow dramatically restricted independent reporting on the conflict. The rouble has plunged in value, and Russia’s extensive trade ties with the West have been all but severed.